Originally posted on: 15 August 2012, recovered after the blog crashed & burned; reviewed and brushed up in May 2015. Also, due to the number of photos, I decided to split the post in two parts, one covering Vancouver proper and the other covering the surrounding area. 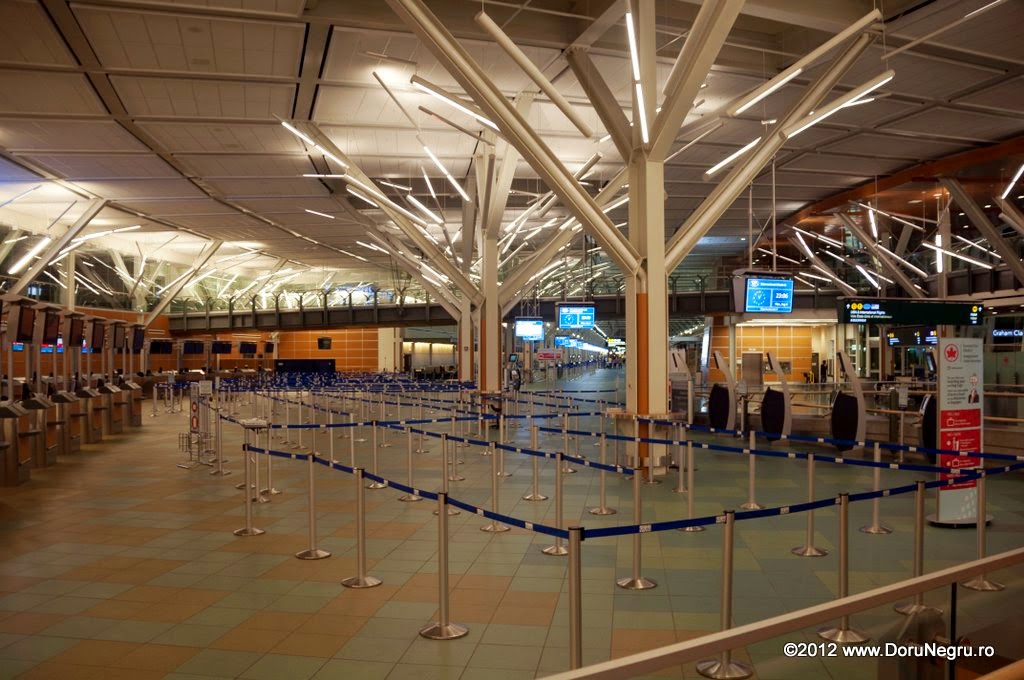 The first contact when traveling to a new city is, usually, the airport. Vancouver International Airport (YVR) is large, beautiful, and well organized. If you need more info than what the omnipresent information screens present, and you have a smartphone or tablet, you have free wi-fi for an unlimited amount of time, and at a pretty decent speed too, despite the large number of users – something I haven’t found in too many places (sometimes it’s only paid access, and then sometimes the speed sucks – as it was in Heathrow, other airports have free access for 15 to 60 minutes and then you have to pay – as it was in Frankfurt).

The best (and fastest) way to get downtown from the airport is by metro – just follow the arrows for Canada Line and you’ll get to the platform. The tickets can be purchased from automatic vending machines and they cost $7.5 for two zones – they are more expensive at the airport than in the city because there is an added surcharge for passengers here), and before getting on the train you have to validate them at some posts near the vending machines. The trains are fully automated, which means we could see out the front and rear windows as there is no driver’s cabin. The trains run every 7 or 8 minutes by day and 20 minutes at night, and the last train going downtown leaves around 1 am.

The first part of the ride is above ground, and then the train enters the tunnel. The ride downtown is rather long, so, if possible, take a seat. The trains are smaller than in other cities, made of only two wagons, so they can fill up quick should there be a lot of passengers deciding to use them. The good news is that the airport is the system’s terminus, so the trains are not coming already full.

Once in the city, you can either transfer to another underground line or  to the above ground transport system to get to your destination. You can plan the route in advance (or, if you have mobile internet access, on the fly) using Google Maps, and the system is well laid down and reliable.

Downtown Vancouver is a rather small area, a rectangle of roughly 3 x 2 km (1.5 x 1.2 mi), so one can walk easily and rather quickly from one point to another there. For those who want to rent a car, keep in mind that parking is expensive and the spots are scarce; it’s much better to use the public transport. If you stay at one of the “big name” hotels downtown, and you are going to rent a car, prepare to pay as much for parking as you did for the car – at Hyatt for instance self parking was $40/day and valet parking was $50/day, tip not included, and we rented a Ford Focus for $49/day. An alternate variant is to park at a public parking; they’re also rather expensive ($20/day), but still by comparison they are looking more affordable.

A few things about Canada:

– they use the metric system – that is km, liter, Celsius degrees;

– they drive on the right side of the road, as in most other countries in the world;

– most prices displayed are before tax. That means that there is a variable percentage on top of the displayed price added at the cash register. Or, to put it into another perspective, if I have $10 in the pocket and see a $9.99 piece of something, I won’t be able to buy it as I will have to pay $11+.

To see downtown Vancouver, there are a number of options:

– get a map from the front desk of your hotel and walk around – we got to see more and went off the beaten path to discover some beautiful local gems;

– buy a day pass for public transport – it covers a vast and well laid down network comprising of the underground, bus and trolley lines as well as some ferry lines;

– buy a ticket for the hop on hop off – the most expensive variant, around $40, but if you buy at the same time a ticket for the aquarium, you get free access on the bus for the next day and bypass a (usually) very long waiting line at the aquarium. Information comes in two flavors – the driver also being the tour guide (at least with Vancouver Trolley which we used – their buses look like San Francisco streetcars), or a multi-language recording (Big Bus) tells you what sights the bus is passing. Personally, I think the first variant is better as it is interactive, and you can ask and find recommendations and “secrets” about things to see and places to eat well. 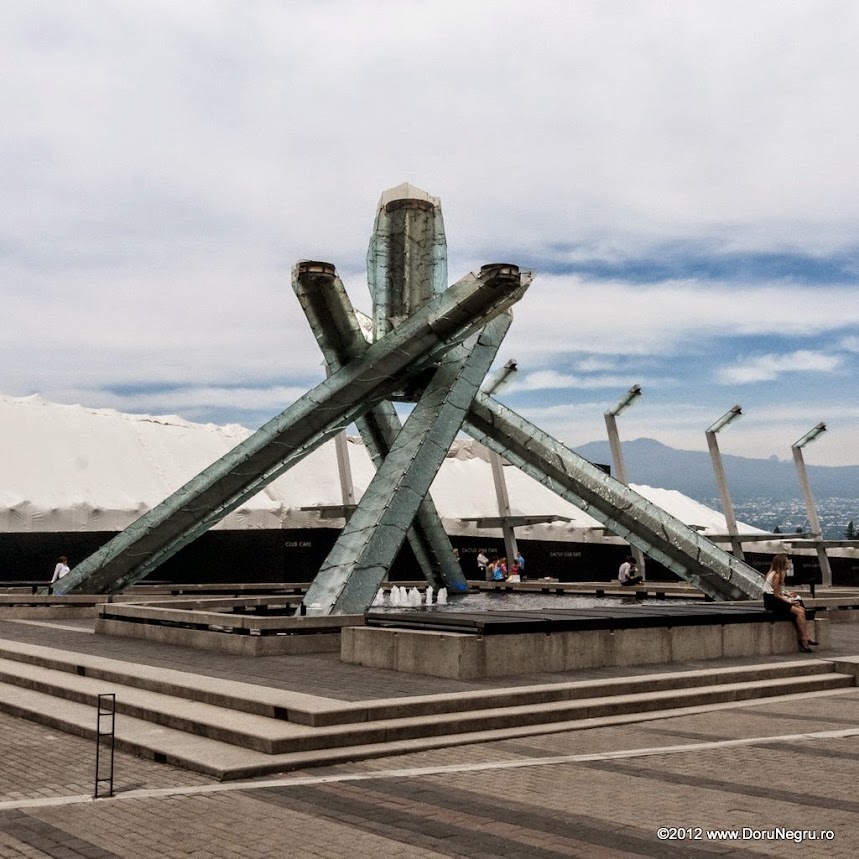 – Canada Place, the center of the 2010 Olympics, with the Olympic torch, press center and various other buildings, now serving as a cruise ship terminal and conference center, is situated on the shore of Coal Harbour. Just by its side there is the Vancouver Harbour Water Airport; we saw seaplanes come or go every 5 to 10 minutes. For those sharing the passion for planes, it’s as good as it gets: you can see every movement from rather close, with no fence or light pole to get in the shot and no guard agents telling you you are not allowed to be there or take photos. The downside is that in about half an hour you get to see most of the plane types (de Havilland Beavers, Otters, maybe a Twin Otter as well, from 3 or 4 airlines, the largest of which is Harbour Air);

– Waterfront, Coal Harbour – formerly an industrial area, 15-20 years ago being a very shady neighborhood, that has now transformed to a luxury residential neighborhood with lots of glassy skyscrapers;

– West End, another residential neighborhood but with small quaint houses; while you are there go at the corner of Davie and Burrard streets to see the Davie Village Community Garden – a city garden owned by the Vancouver Public Spaces Network, where people can get a (small) garden plot to grow their own flowers, plants or food.

A house in West End

A house in West End, with high-rise apartment buildings in the background

The Fire and Rescue Services building in West End

A stone house in West End

The Davie Village Community Garden – a city garden owned by the Vancouver Public Spaces Network, where people can get a (small) garden plot to grow their own flowers, plants or food

– Robson Street, is THE shopping street in Vancouver. While I’m not part of their target, I couldn’t help but notice a large number of brand-name stores and high-end restaurants, along with numerous old-style boutiques. I also noticed the number of exotic cars and motorcycles cruising up and down the street, making it a point of attraction for car & bike enthusiasts.

– False Creek is a small inlet to the south of Downtown that separates it from the rest of the city. It is a very popular boating area, and the numerous marinas loaded with all kind of boats plus the number of people going about in boats, kayaks, canoes and paddle boards are proof for this. We got on one of the mini-ferries that go around it to cross it and were rewarded with a beautiful view from the water. 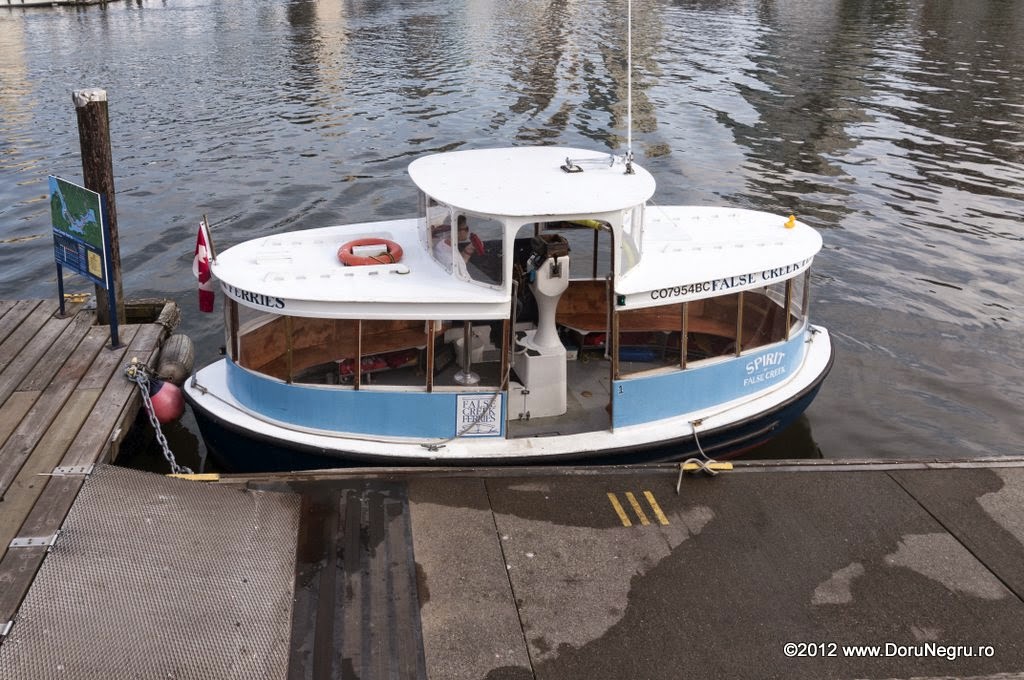 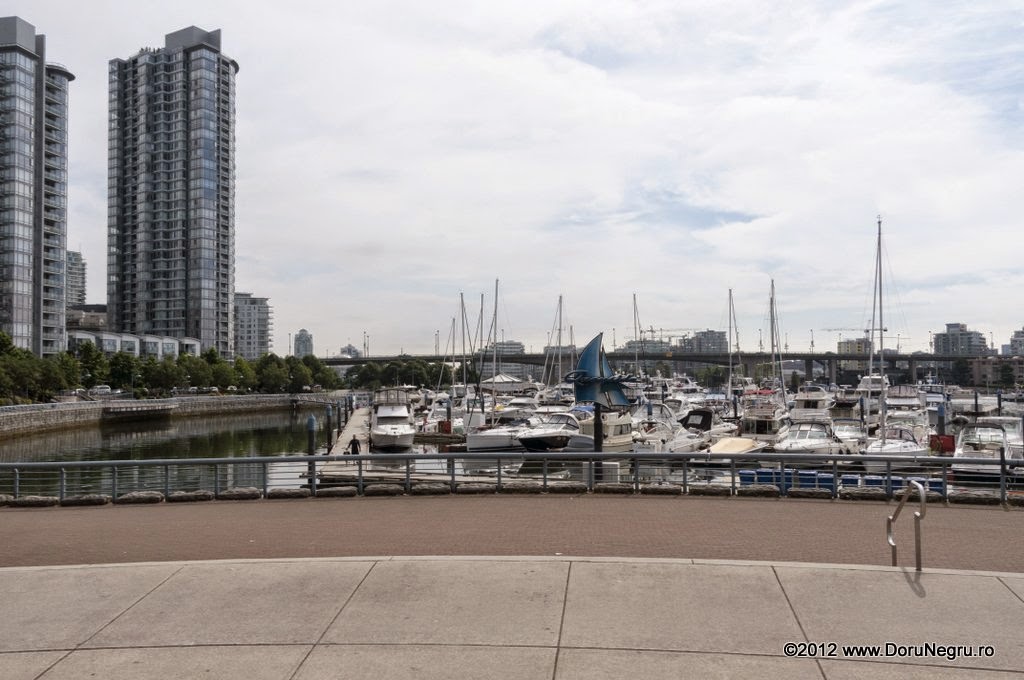 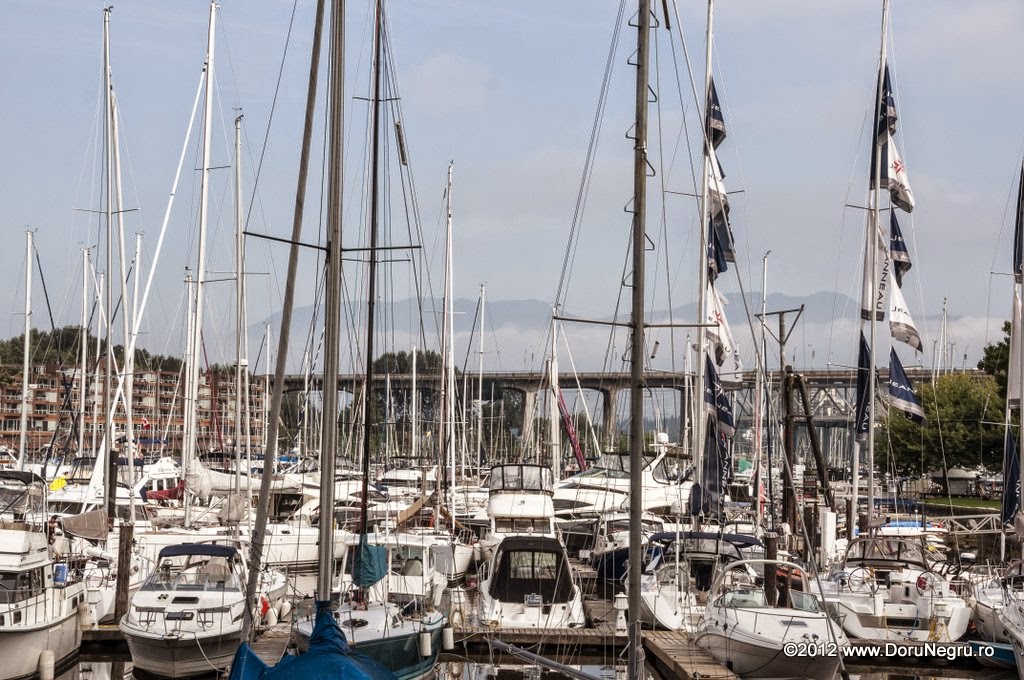 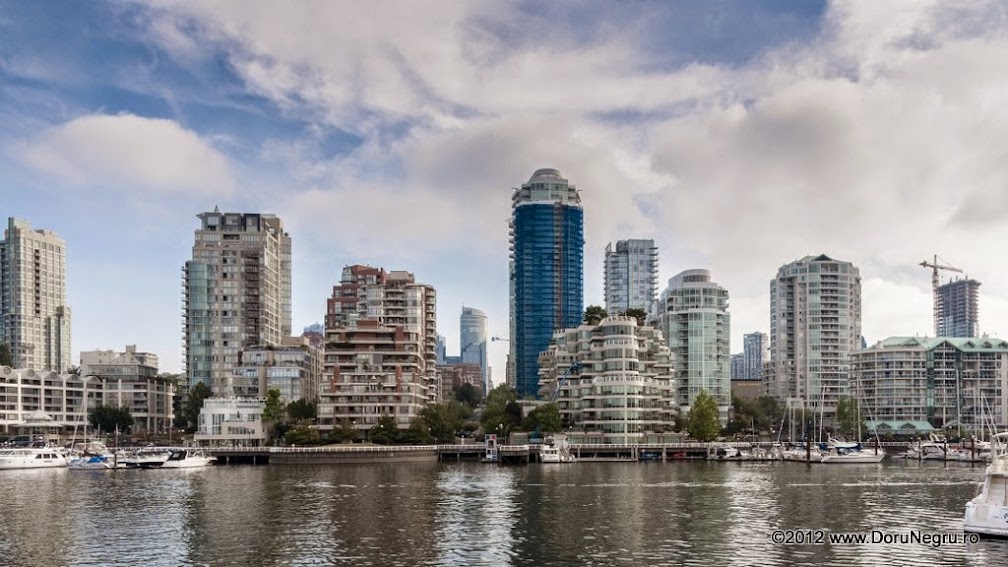 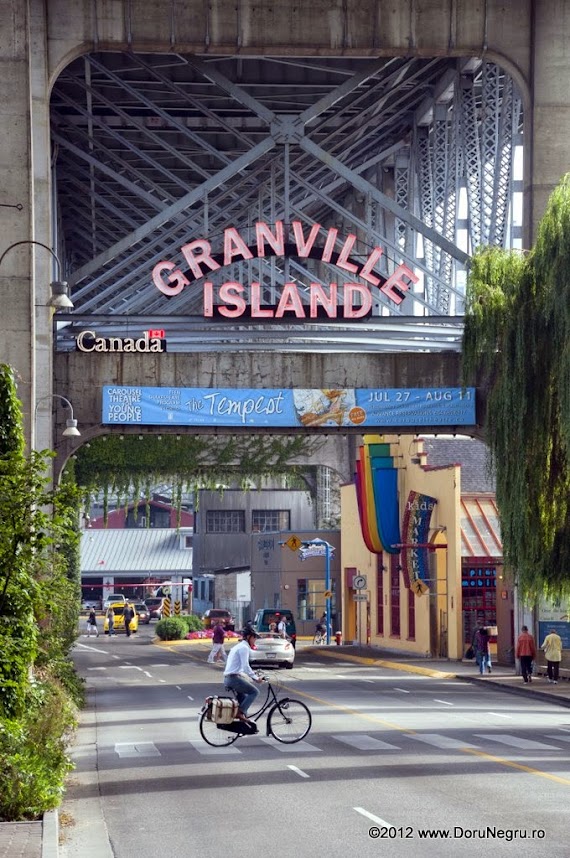 – Granville Island is a small island – formerly an industrial area – where now there is a public market, small and large shops of all kinds, theaters and more. The guide on the bus told us it is Canada’s most visited attraction, with more tourists than Niagara Falls. While I strongly doubt that, having visited both sites, I do agree that the island was packed full with tourists; if you want some breathing space then you should go there in the morning, before 10-11 at most. You will find good food there, whether you like Indian, Chinese, Italian or whatever else you can think of. Better yet, the ice-cream is delicious.

– Gastown was Vancouver’s first downtown core and is a nice neighborhood with cobblestone streets, restaurants, boutiques and nightclubs. Its emblems are the statue of “Gassy” Jack, a steamboat captain who opened the first saloon around which the town formed and took shape, thus becoming the founder of what is now Vancouver, and the steam-powered clock, which, despite being built in 1977, is promoted as a heritage feature and has since become the most famous landmark of Gastown. 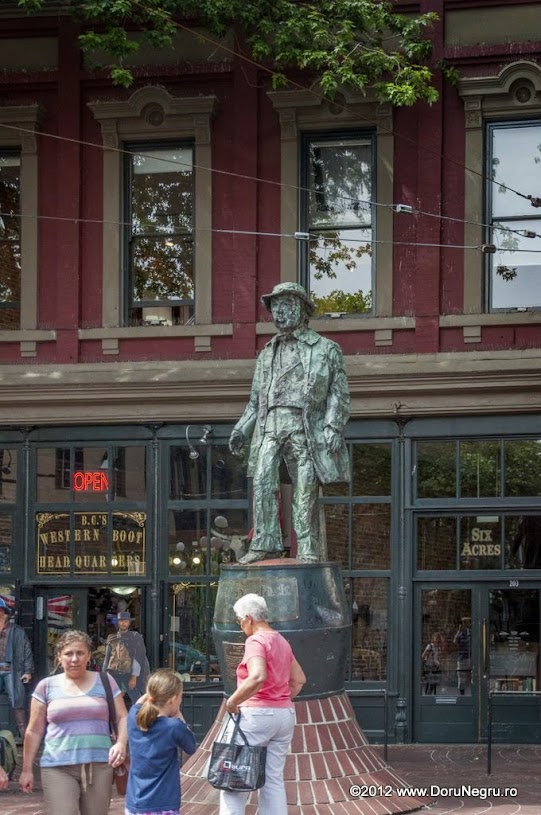 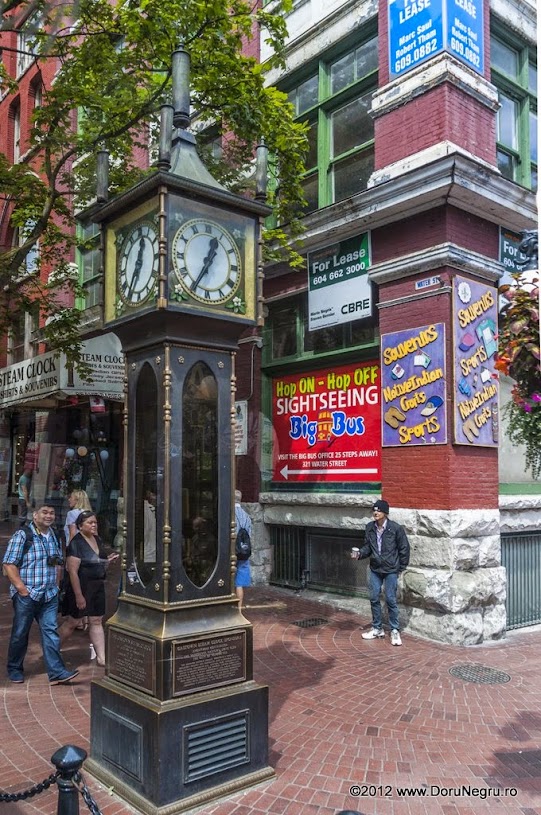 – China Town – an old traditional Chinese neighborhood, with traditional fresh fruit and vegetable markets from nearby at affordable prices (at least for Canada), restaurants, shops and quiet neighborhoods. The main attraction of Chinatown is Dr. Sun Yat-Sen Classical Chinese Park and Garden, which was voted by National Geographic as the World’s Top City Garden and was included in their book “Secret Journeys of a Lifetime: 500 of the World’s Best Hidden Travel Gems”. We did enjoy this oasis of peace and quiet not far away from a busy city and the contrast between the classical, ancient-looking Chinese garden and the modern steel and glass skyscrapers.

– In the summer of 2012 when we visited Vancouver, an “army” of 33 Terracotta Warrior replicas had taken over the city. Placed in various spots, they were then auctioned at the end of the summer. As I have then read, various other similar statues had been placed through the city in other years, including bears and killer whales. 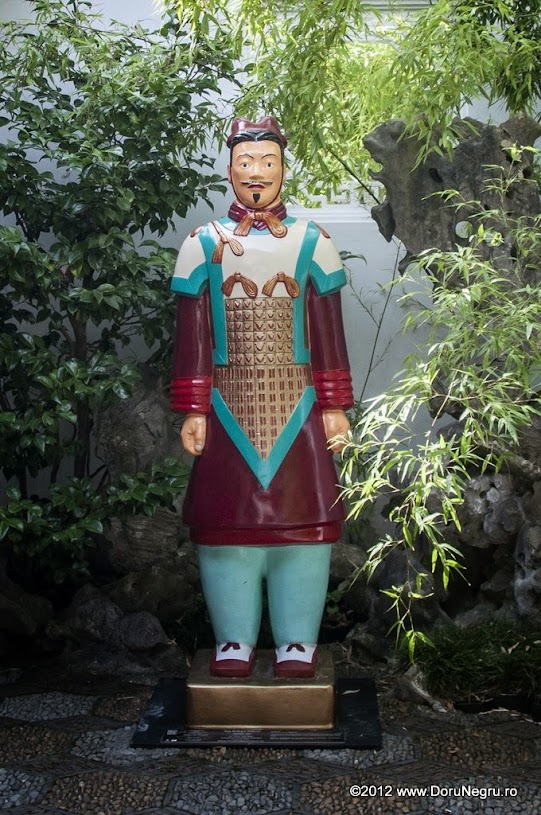 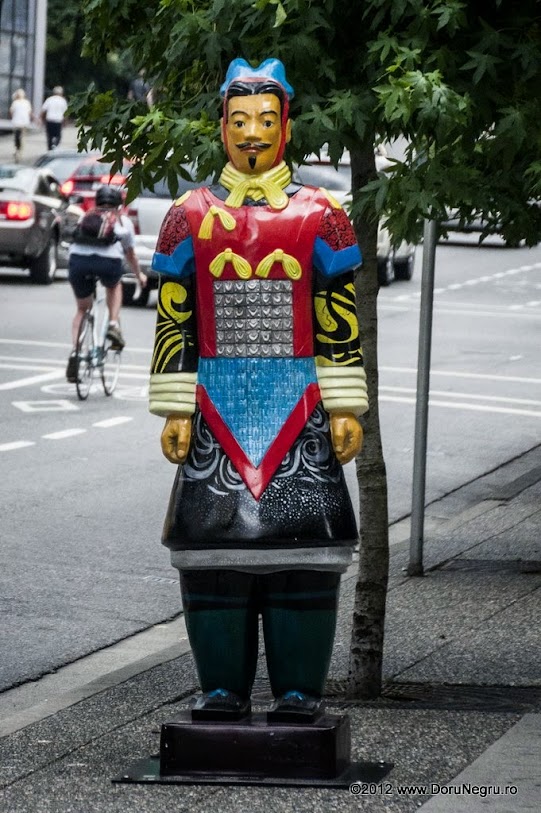 – Stanley Park – it’s actually a preserved forest on a peninsula west of Downtown. It’s huge, marginally smaller in area than Downtown. There is a summer theater, restaurants, playgrounds, a swimming pool, lots of trails and paths, 3 beaches, the aquarium and a biking / running / walking trail going around the peninsula on the seawall which is 7 or 8 km long. 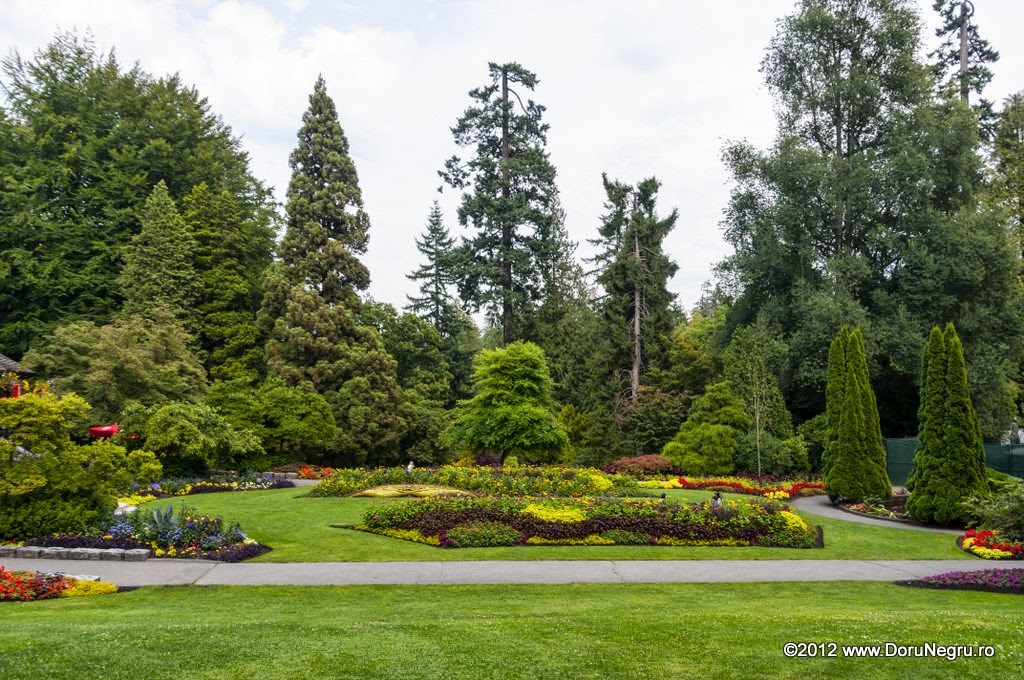 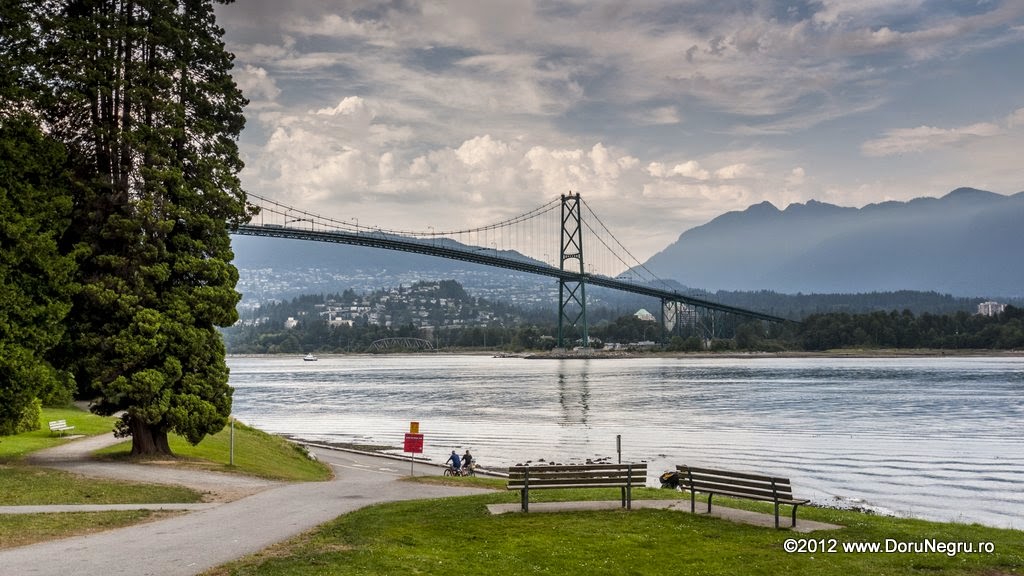 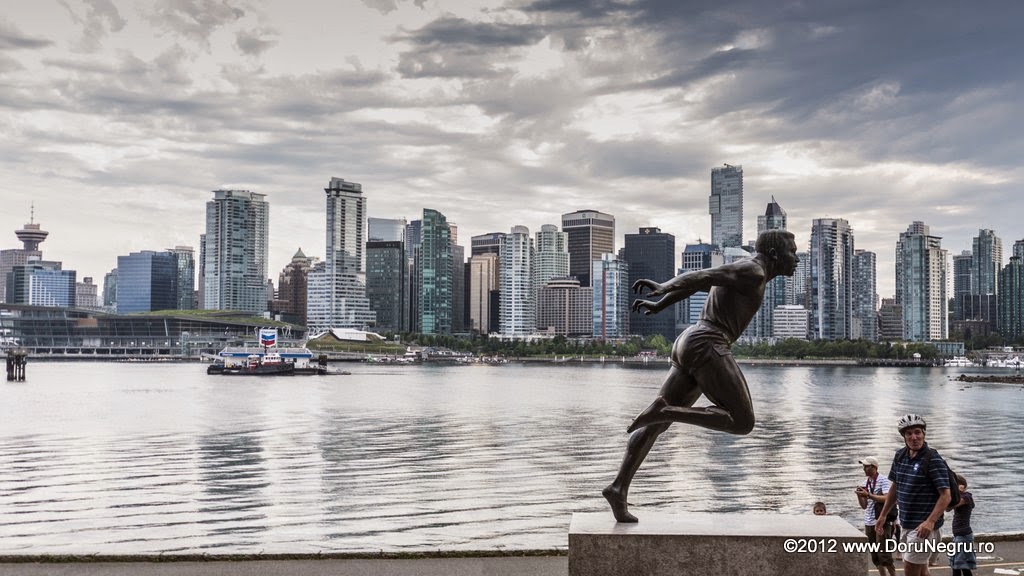 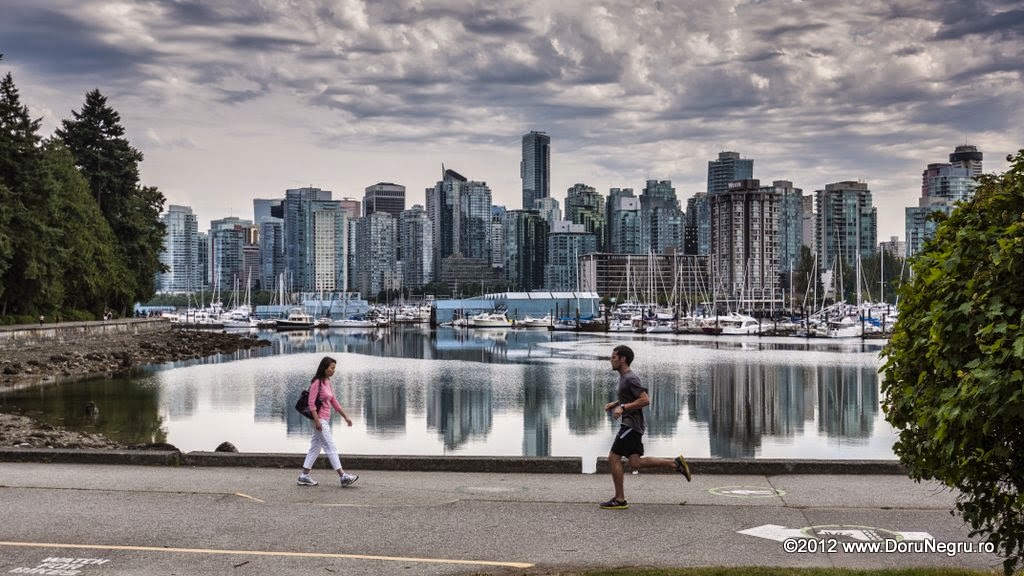 – The aquarium in Stanley Park is one of the most beautiful I have seen so far, and also one of the largest and more comprehensive ones – this is why it will soon get its own post.

–  Parks. Lots and lots of parks, from those as small as your bathroom to whole forests transformed in parks, like the case of Stanley Park. And take a good look at the buildings near you. Chances are you will see from plants in pots up to whole trees planted on terraces or on top of skyscrapers, like this one, near Beach Avenue. I think it’s rather important to mention that large parks, like Stanley Park or Lighthouse Park are actually forests with trails, paths, maybe some playgrounds and such but they are fist and foremost forests, and there is little to none artificial lighting after sunset, so it’s not advisable to stay too long after sundown – especially if you have no torch or other mean to see in the dark. While I doubt you will get to see a real grizzly bear in them, there is some wildlife, but, more importantly, the risk to trip, fall or get lost is real – people did get hurt there, so it’s important to stay safe. 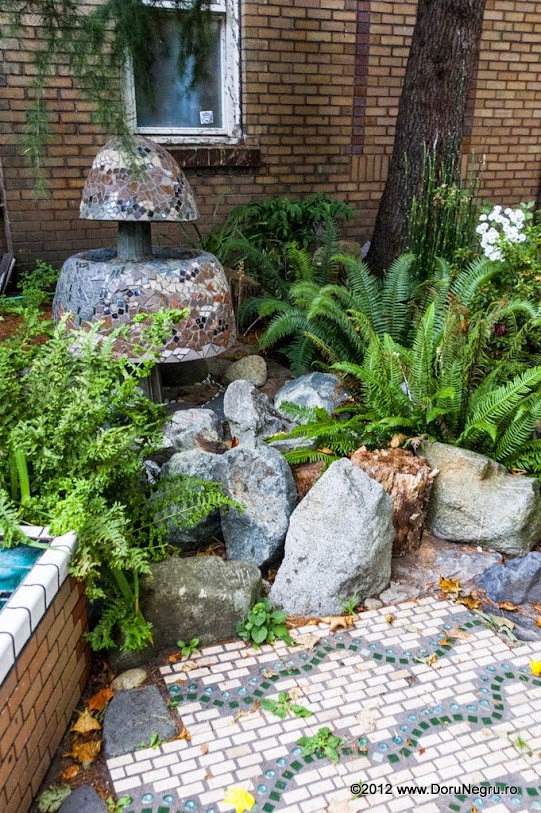 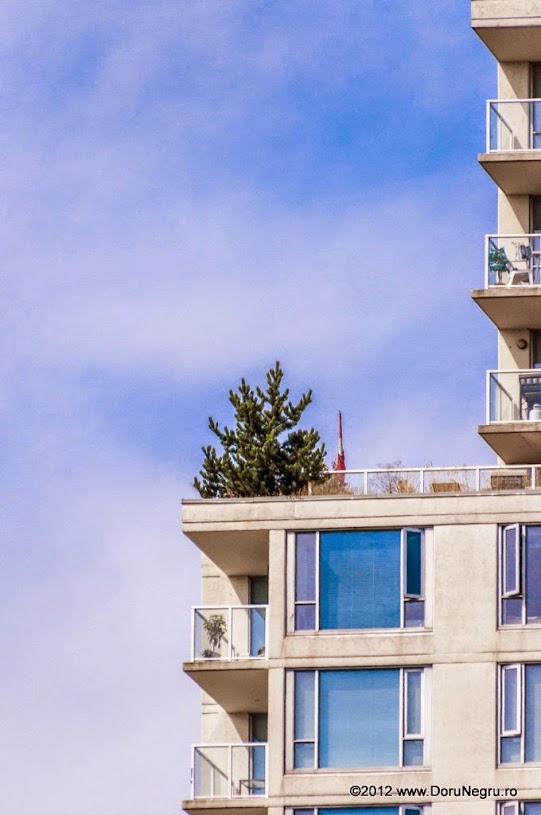 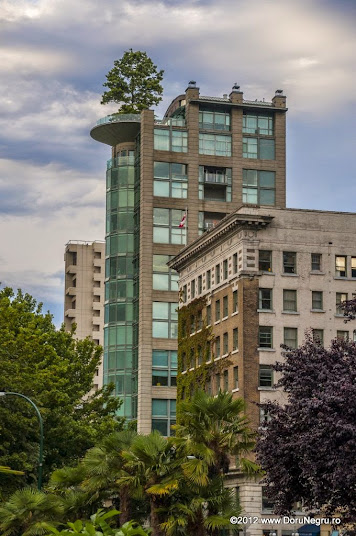 There is another post covering things to do and see in the area near Vancouver.